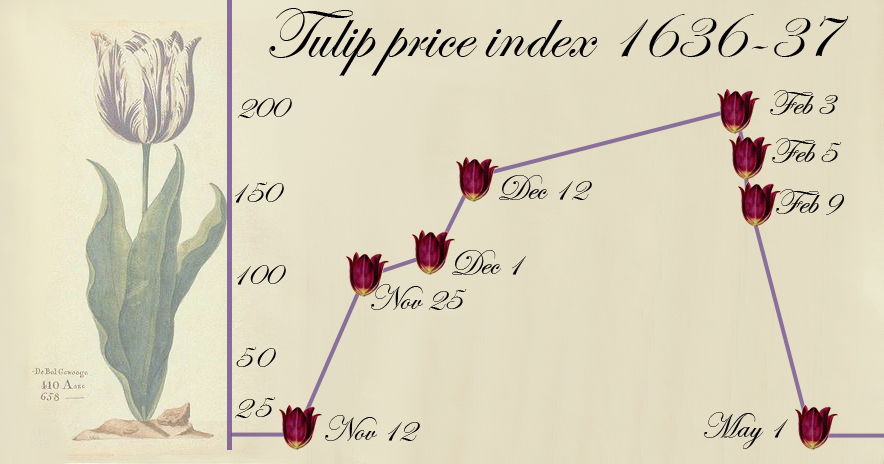 “Those who do not learn history are doomed to repeat it!”

Most people are familiar with that quote and the meaning.  Being an avid reader of history, it surprises me how this comes up again and again, even during my short lifetime.  The idea that this time will be different or we have learned our lesson seems hollow at best.

The most glaring example of this is the price of Bitcoin.  A single Bitcoin traded for less than $1,000 at the start of 2017 and was trading briefly over $17,000 this past week.  Given the fact that you cannot turn on any business news without seeing a report on Bitcoin, screams of a bubble.  Yet, it keeps rising and you hear about one new investment fund after another, with a focus on Bitcoin.  This coming week the Cboe will start trading in Bitcoin futures.  This will only accelerate the hysteria over this speculative investment.

This piling in of investors, driving up the price of Bitcoin, is comparable to the Tulip Mania experienced in the Dutch Republic during the mid-1600s.  At the height of the craze in 1637 a single tulip bulb (yes we are talking about the flower) sold for more than 10 times the yearly income of a trained craftsman.  Now I like tulips, but I am not sure I would spend even a day’s salary on one bulb.  There was no real logic to this demand other than speculation, but the craze took hold and led to a massive bust.  The picture above is an estimated of what happened to the price of a tulip bulb during that period.  The rise was swift and the fall even swifter.  Far more people lost money than made money, which is always the way it happens.

“Now wait for GB, you aren’t being fair.  There are several arguments for Bitcoin being a legitimate investment and currency (cryptocurrency).  Bitcoin is growing as a vehicle of exchange.  It is no different than US dollar which is a fiat currency and simply based on faith.”

The adoption of Bitcoin as a legitimate vehicle of currency is a big stretch from its current state.  Only a fraction of a fraction of businesses accept payment in form of Bitcoin.  I would argue, those that do accept Bitcoin are doing it for the media coverage more than anything else.  The huge increase in its price has nothing to do with a new business deciding to accept Bitcoin, as a means of payment.

As comparing it to the US Dollar, there is a big difference between the good old greenback and one of the founding forms of digital currency.  Bitcoin is backed by nothing.  We don’t know exactly how much or how secure Bitcoin is.  Less than 1% of account holders control 60%+ of the total number of Bitcoin.  That is huge concentration and allows for huge manipulation of the price of Bitcoin by a few individuals.  It is simply based on a perceived value.  The rise in price has nothing to do with real value, just a mad rush by individuals jumping on the Bitcoin bandwagon.

Yes, US Currency is fiat currency and not back by gold.  It is backed by the US Government, the 330+ million US citizens that use & depend on that currency, and is accepted as a means of payment by all businesses in the US.  It doesn’t stop there.  The US currency is the number one currency in the world.  Nothing comes close, not even the Euro when it comes to global use.  Both the Chinese government and Japanese government have huge holdings of US Treasury’s (dollar currency), so they have a huge interest in our currency remaining stable.  There are countless other countries that use the US dollar as their own official or unofficial means of exchange.  Every extremist prediction of its downfall has been nothing but wrong.  The US dollar as a form of reliable and stable currency is here to stay for the foreseeable future.

Bitcoin has no intrinsic value.  Its value is simply determined by demand & supply.  Now if this demand was related to real practical use, you could argue it has some value.  But the huge rise in value has had nothing to do with an increase in the use of Bitcoin.  Bitcoin is far from a serious form of payment.  The Venezuela Bolivar is more widely accepted as a form of payment than Bitcoin, but I am not sure you would find anyone recommending the Bolivar as a solid investment.

It is clear that Bitcoin rise is solely as an investment (not as currency) and a speculative one at that.

Other investments like stock or bonds have the backing of actual future cash flow &/or assets of the company.  Real estate & communities (timber, oil, and minerals) are tangible and subject to supply and demand based on real use.  Yes, speculation comes into play from time to time, but ultimately these assets are worth something or have some real use.

“What about gold, GB?  Gold is only worth something based on supply and demand.  Most of the value of gold is based on desire and perceived value of gold.”  That is very true and if we were arguing about investing in gold, this would be a different article.  I would still argue that gold does still have practical applications, from use in the manufacturing of electronics to applications in jewelry.  I have not seen anyone offering a Bitcoin necklace yet and I am pretty sure my wife would prefer a gold necklace over a Bitcoin necklace for Christmas.  The real difference is gold has been a means of currency or a perceived asset for thousands of years.  It has value in nearly all population centers in the world and countless cultural traditions support the value of gold.  Yes, gold is a real tangible asset and has a few thousand more years of support for this belief over Bitcoin.

No, Bitcoin is on par with tulip bulb.  Yes, Bitcoin has some use, but that is extremely limited.  Tulips also have some use, but that use is as a pretty flower.  Both are worth something, but are they worth a 1,500% increase in value in less than 12 months?

Bitcoin’s rise in value is a massive bubble waiting to happen.  As of the writing of this article, it had a market cap of $263 Billion (yes Billion).  That is larger than the market cap of GE or AT&T and puts it in the top 15 largest public companies by market capitalization.  It will crash and crash hard.  In the end, a lot of people are going to lose money, with only a few making money.  That is the way a bubble always works.

Nearly everyone is bad at timing markets.  This has been proven again and again.  So for those investors who think they will be able to time this bubble well, good luck to you.  I rather just buy a lotto ticket; at least my wasted dollar goes to our state educational system.

Would love to hear your comments or why you think I am wrong.

Please come back!  My focus is currently on content.  I am slowly tweaking the site to make it more appealing.  Please leave comments or email me with questions.

Thank you for sharing some of your time with me.